Z may be the last letter of the alphabet, but it sure doesn’t rank last on curious creatures! Not only will you get the inside scoop on animals that start with letter Z, learning interesting facts, each critter’s Genus(1) and Species(2) that make up their Scientific Name, but you can also be the smarty pants that know that Zebra is only one of the animals that starts with letter Z.

And for double the fun, check out our awesome Animal Coloring Sheets along the way!

Amphibians that Start with the letter Z

The interesting and mysterious looking critter on our spotlight for amphibians that start with the letter Z is Ziegler’s Crocodile Newt. Although it’s coloring is much different than the Crocs we’re used to seeing, their defined scaley-like backs and heads have quite a few similarities. This striking amphibian can be found crawling around in Southern China and Northern Vietnam. (3) Orange and Black never went so well together; work it Ziegler’s Crocodile Newt!

Birds that Start with the letter Z

We’re definitely going to touch on Zebras later on, but take a look at this bird that starts with the letter Z, the Zebra Dove!

These fun-looking birds also have a fun long-running competition they partake in, in Thailand! It is referred to as a Cooing Contest, as these beautiful birds have quite the coo to them. And the Zebra Dove is a symbol of good luck to families who raise these birds in their homes, this is why there are so many Zebra Doves who can enter the Cooing Contest. (4) Trade in your Superbowl tickets for the Cooing Contest!

Dogs that Start with the letter Z

Look out! Adorable dog mix coming through! The Zuchon is cuddly breed mixed with a Shih Tzu and a Bichon Frise, giving it the cute teddybear look that it is well-known for. These little pups can grow to be around 12 inches in height, and most likely at a max of 15 lbs; what a tiny cutesy dog! The Zuchon breed’s debut wasn’t all too long ago, only in the 1990s, in the U.S., was it first brought into the dog world. Some dogs are bred for hunting or herding reasons, but the Zuchon was bred to be cuddly, affectionate, and a perfect addition to any family. (5) It’s safe to say the mission is accomplished!

Fish that Start with the letter Z

Nope, we’re not at the Zebra just yet. But we do have an extremely interesting fish that starts with the letter Z for you to check out and learn about; the Zebra Lionfish!

Just as Lions have a large and striking Mane, the Zebra Lionfish displays quite the gorgeously patterned fins. But there is a big difference between these creatures, well, besides the fact that they are compelty different species. The Zebra Lionfish is stunning, but you don’t want to get your fingers near it. The Dorsal Fins of this particular fish are actually poisonous. (7)

Insects & Spiders that Start with the letter Z

Sorry for the false alarm, this isn’t the Zebra spotlight yet, but take a look at this creature!

This creepy crawly spider that starts with the letter Z looks like it lurked straight out of a Tim Burton movie, it’s the Zebra Spider! These spiders are known amongst the Jumping Spider speieces, because, you guessed it, these critters can jump! They are tiny, fast, and jumpy spiders that don’t spin webs like other spiders but instead use their intimidating fangs and striking eyes. A Zebra spider has been known to hunt down Moths, which are much larger then they are and goes to show how insane their hunting skills can be. (8) You can never judge a spider by its size!

Mammals that Start with the letter Z

Here it is, the moment you’ve been waiting for. We couldn’t go through a list of Animals that start with letter Z without mentioning the famous Zebra!

Unless you’re visiting a Zoo or wild animal Sanctuary, you won’t be able to set your eyes on the iconic stripes of a Zebra unless you’re in particular places in Africa. There are 3 different species of Zebras, but the one that’s most well-known is the Plains Zebra. Obviously not plain in appearance though, who wouldn’t be dazzled by that beautiful black and white pattern! And Zebras, no matter their species, love to travel in herds and stick together. Their herds can be in the thousands at times! (9) Can you imagine their family reunions, what a riot!

Reptiles that Start with the letter Z

We simply couldn’t resist ending this amazing list of Animals that start with letter Z without mentioning yet another fantastic critter that has Zebra in it’s name; it’s just too much fun!

What a zany bunch of animals that start with letter Z! Disappointed you’re at the end? Well, the animal fun doesn’t have to end there. Take a look through our free and wildly adorable Animal Coloring Sheets, ready to be printed out and enjoyed!

Dorsal Fin: The fin or finlike integumentary expansion generally developed on the back of aquatic vertebrates. (6) 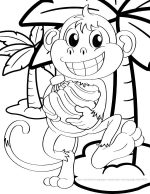 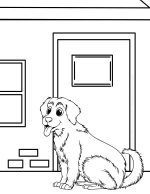 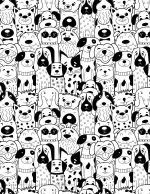